The Travis Letter – Victory or Death

On February 24, 1836, William Barret Travis, Commander of the Texian rebels in the former mission known as the Alamo, wrote a plea for help as they were surrounded by enemy forces under Mexican dictator Santa Anna.

“The People of Texas and All Americans in the world”

this letter is known as one of the most stirring documents in American history.

Travis’ letter had an immense and immediate effect.   Responding to the letter, 32 men arrived from Gonzales on March 1, 1836.  Word of his letter spread quickly, first to New Orleans then onward to Boston and New York City. Yet with the Alamo located hundreds of miles from the U.S. border and a month from Washington, D.C., distance and terrain prevented most volunteers from arriving before the Alamo fell on March 6.

A fan of dramatic writing, Travis understood the power of words.  He addressed his letter to “All Americans in the world” specifically to inflame their patriotic passions and rally them to his cause and that of Texas. In so doing, he transformed the Texas Revolution into an American fight for liberty against tyranny.

In Texas, many of the volunteers stirred by Travis’ letter formed the core of the army Sam Houston led to victory over Santa Anna on April 21, 1836.  With his defeat, the Republic of Texas was born and a chain of events began that led to the Mexican War a decade later.  U.S. victory in that war brought the American Southwest into the nation. Consequently, Travis’ letter shaped the destiny of America and the world.

Commandancy of the The Alamo

To the People of Texas & All Americans in the World-

I am besieged, by a thousand or more of the Mexicans under Santa Anna – I have sustained a continual Bombardment & cannonade for 24 hours & have not lost a man – The enemy has demanded a surrender at discretion, otherwise, the garrison are to be put to the sword, if the fort is taken – I have answered the demand with a cannon shot, & our flag still waves proudly from the walls – I shall 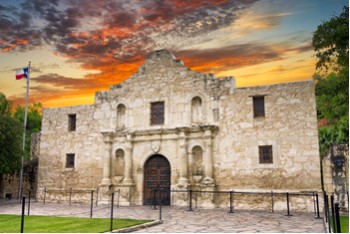 never surrender or retreat.  Then, I call on you in the name of Liberty, of patriotism & everything dear to the American character, to come to our aid, with all dispatch – The enemy is receiving reinforcements daily & will no doubt increase to three or four thousand in four or five days.  If this call is neglected, I am determined to sustain myself as long as possible & die like a soldier who never forgets what is due to his own honor & that of his country – Victory or Death.

P. S.  The Lord is on our side – When the enemy appeared in sight we had not three bushels of corn – We have since found in deserted houses 80 or 90 bushels and got into the walls 20 or 30 head of Beeves.